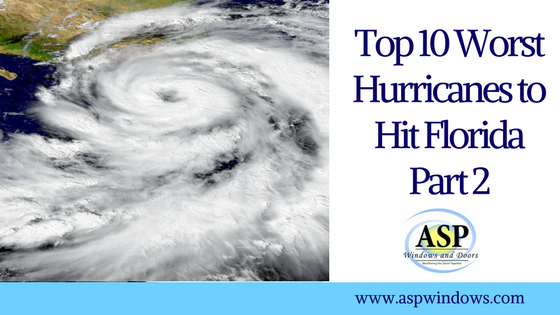 This is a continuation from part 1 – Top ten worst hurricanes to hit Florida. If you haven’t read it yet, make sure to check it out.

In the wake of the unprecedented flooding going on in Houston because of Hurricane Harvey, a huge storm the size of Florida itself came barreling towards the Sunshine State. Out in the water, Irma was a total nightmare, setting records such as the strongest recorded storm in the Atlantic as well as the longest time a Hurricane remained a Category 5. Irma also caused complete anarchy on St. Martin. The storm made Barbuda nigh uninhabitable, which is still the case at the time of this writing.

Irma did a number on Miami-Dade and Broward County with significant hurricane-force winds and gusts pummeling the two counties for nearly 24 hours. What is remarkable, is the fact that it missed them. Irma made two landfalls on the west coast of Florida as a Category 4. Which caused damage to the Keys and Naples.

After World War I, Miami was the fastest growing city in the United States. It was the place to be. And then this storm came and altered the history of the city forever.

They estimated the damage at $105 million. To clarify, that is $105 million in 1926 Pre-Great Depression money. That would be $164 billion in today’s money. Without question the Great Miami Hurricane gave Biscayne Bay a beating it would never forget, proving to be the costliest hurricane in United States history.

Historians have also said that the hurricane sent Miami into the great depression nearly a decade prior to when the actual depression began.

Also known as the San Felipe II Hurricane, the Okeechobee Storm killed 4,000 people. It killed 2,500 people in Florida alone, making it the deadliest storm to ever befall the Sunshine State. It’s also the 9th deadliest hurricane in Atlantic Ocean history and the 2nd deadliest in the United States.

Surprisingly, the storm did not have a great effect on any of the major cities within the coastal areas. Miami, Hollywood, and Fort Lauderdale suffered minimal damage, limited to broken windows and some roof damage with the Palm Beach county losing trees, powerlines, and homes.

The damage happened inland where the storm hit Lake Okeechobee when residents believed that the storm had missed. This is due to it not arriving at the time they were warned. The storm arrived and raised the water level of Lake Okeechobee to biblical proportions, filling up canals and ditches nearby. A 20-foot storm surge detached houses from their foundations. With bodies floating away never to be found or recovered.

Then the storm reversed itself as the rear eye wall was still doing damage. Due to the amount of people missing, some accounts listed the fatalities at 3,411, while the Red Cross estimated the number to be at 1,836. The official number of 2,500 exists as the best estimate. The effects of the hurricane were dramatized by Zora Neale Hurston in her 1937 novel, Their Eyes Were Watching God, currently on the 2005 list of the 100 best English language novels published since 1923.

Florida took something of a break from hurricanes in the 1980’s, which made Andrew the first hurricane for many of the residents there. Andrew developed as a tropical disturbance going 90 degrees north, only to make a complete perpendicular turn. Crushing the Bahamas and barreling straight for Miami-Dade County. Andrew left 1.4 million without power and 150,000 without phone service. It destroyed 63,000+ homes, with 175,000 left homeless.

Infrastructure was in terrible shape as well. It destroyed 82,000 businesses, ravaged 32,900 acres of farmland, and 31 public schools, 59 hospitals, 950 traffic signals, 3,300 miles of power lines as well as 3,000 miles of watermains were all out of operation from the storm.

At the time, Andrew was listed as a Category 3 hurricane that leveled up to a 4 upon landing. For a decade, Floridian’s felt Andrew was a lot stronger than what was officially reported. In 2002, it was found that Andrew hit Florida with winds of 165 mph, which allowed the storm to be reclassified as a Category 5 hurricane.

The positive from Andrew is that it completely revamped the building codes for all of Florida. Since then, we’ve had major development in our infrastructure, making us extremely prepared for the future storms to come.

When Andrew occurred, Miami had television and, most importantly, radio on its side. Communication is critical during a hurricane, you need people to tell you what to expect and prepare for. In 1935 with the Labor Day Hurricane coming, the U.S. Weather Bureau was not useful.

However the storm moved slower than predicted and missed its projected impact on Cuba. The storm was also a significantly smaller system, that packed a powerful eye wall with maximum sustained winds of 185 miles per hour.

The tragedy was the improper preparation of the emergency railway constructed to evacuate the veterans who were working on the Florida Keys after being dispatched by the Federal Government. The train was significantly delayed due to inadequate communication between departments. And was eventually derailed by a storm surge while on route to rescue the World War I veterans.

Due to the bad preparation, poor forecasting, and mismanagement by emergency officials, The Labor Day Hurricane earned the #1 spot on the worst hurricanes to hit Florida. Where it could have easily been placed between 4-6.

Hurricane preparation is the true deciding factor in terms of what makes one storm worse than another. With adequate preparation, necessary evacuation, and the right infrastructure, we can ease the impact of a hurricane on the quality of life by doing things the right way.

At ASP Windows and Doors, we take it seriously to make sure we minimize the damage and threat posed by the next Andrew or the next Irma. For more information on how to best prepare yourself for the next storms to come, please contact us today. We can install your impact windows in Miami.