The windows on a house tend to be the weakest spot. Living in South Florida, you know that when a hurricane hits, your windows must be completely secure; otherwise, you face the very real possibility that the wind will break a window, and from there, wreak havoc and destroy your home. As such, hurricane shutters and hurricane windows are a popular choice. Hurricane windows vs hurricane shutters, which is better? Let’s look at these two options and see how they stack up against each other.

Shutters are a staple in South Florida. They are generally made of aluminum and steel; protecting against strong winds and stopping flying debris. There are different types of hurricane shutters differ from certain companies selling plantation shutters, with the accordion-style being the most popular. Hurricane shutters do not seal the windows, but rather, cover them, acting as a shield in front of your window. Keep in mind that the glass behind may still be shattered by the pressure exerted on the shutters upon impact of a projectile.

While shutters are not a bad choice, they do come with downsides.  Every time a storm heads your way, you must make the rounds. By that, we mean, go to every window and put the shutters up, thereby securing and locking them. Because hurricane season starts in June and ends in November, this is often done in hot and humid weather. After the storm passes, you must once again go around the house and take the shutters down. 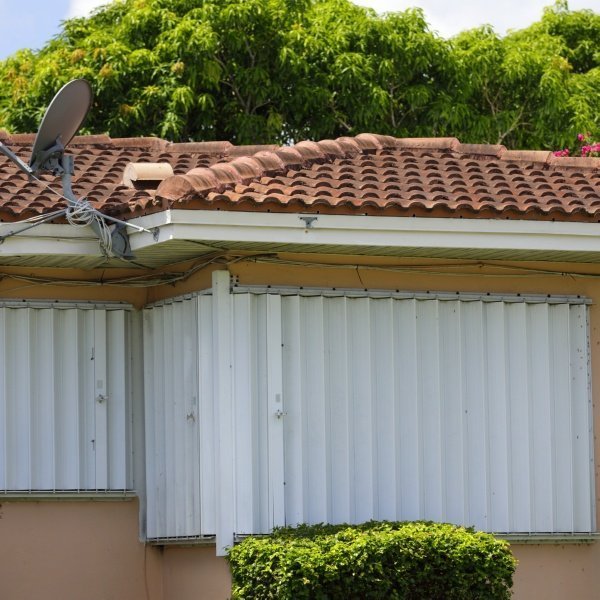 If you have typical panel shutters, this can take a few days to complete and, in the meantime, your house is in the dark as the shutters block the light. As you probably know, hurricane seasons are becoming more intense bringing with them more storms every year. Because of this,  having shutters can result in a never-ending exercise of putting on and taking off shutters. And on top of that, unfortunately, shutters do not offer the same protection as hurricane windows.

Hurricane impact windows offer the best protection against more than storms as well. They protect against many other perils, such as burglars, noise, and more.  Once you have impact windows installed in your home, you are done with shutters forever; you do not have to worry about when the storm is coming, you do not have to worry about putting up shutters in the heat and having your home become dark as a result of shutters shielding you from the outside world. The protection offered by these windows is not contingent on you doing something, it is simply there all year round.

Even though we are used to seeing shutters everywhere, they are still an eyesore.  Having rails on the top and bottom of every window is simply not aesthetically pleasing. There are some exceptions; for example, colonial shutters do not look quite as bad as the rest of them, unfortunately, the protection they offer is minimal. Hurricane windows, on the other hand, look great by anyone’s standards.

In comparison to shutters, they do cost a little more but this expense is one that will, over time, mitigate itself. In Florida, given the number and severity of storms that we are exposed to, insurance companies give you a discount if you have properly installed hurricane windows. Let that sink in: you know that hurricane windows offer great protection when insurance companies are willing to charge you less just for having them.

Why Impact Window Installation IS NOT a Do-It-Yourself Job